The advanced stage St-Onge Wollastonite Deposit is located approximately 40 kilometres north of the small town of St-Ludger-de-Milot and some 90 kilometres north-west of the city of Saguenay, in St-Onge township in the Saguenay-Lac-St-Jean region of Québec.

In addition it is located in the heart of the Lac-St-Jean Anorthosite Complex Québec, which is approximately 100 km south-west of the Ariane Phosphate Lac-à-Paul Phosphate Deposit or 67 km north-west of the Magris Resources Niobium Niobec Mine.

The St-Onge Wollastonite Site is already supplied by a power line, accessible by all year round paved and forest roads that are easily passable with pick-up trucks and heavy equipment. As noted, the site is a short distance by road to the urban centre of St-Ludger-de-Milot which has a skilled work force, and it is 140 km by road to the deep-water Port of Saguenay.

History of the Deposit

The St-Onge Wollastonite Project consists of 26 map-designated cells covering a surface area of 1465 hectares (about 15 square kilometres). The project hosts a historical deposit of 27.54 million metric tons (Mt) averaging 37% wollastonite, as reported in 1993 by Orleans Resources Inc. The reserves are divided between probable reserves of 15.35 Mt @ 38 % wollastonite and a possible reserve of 12.19 Mt @ 37 % wollastonite (Source: MERNQ SIGEOM). Note that the ore reserve estimates and feasibility study performed by Orleans Resources Inc. was completed prior to the adoption of NI 43-101 standards and are therefore considered historical assessments.

After its discovery in 1988 during a MERNQ regional mapping project, approximately 90 diamond drill holes were collared on the deposit Site area between 1991 and 1993. Orleans Resources Inc. attempted to produce about 1,000 tons of wollastonite at the Site during the mid-90’s. However in 2001 operations at the Site ceased, the infrastructure was dismantled, equipment sold, and the mine site was restored.

Other wollastonite occurrences on the Property include the along-strike Rivière du Nord and Rivière du Nord-Sud sites. The wollastonite and diopside skarn at the Lac du Bras showing has the peculiarity to be mineralized in sphalerite veinlets returning 0.38% Zn and at the Rivière du Nord-Est showing to be mineralized in galena where a block sample returned 1.50 % Pb (Source: Sigeom MERN). As far as other mineral commodities, the St-Onge Wollastonite Property contains the historical Lac-Aux-Grandes-Pointes zinc-lead showing characterized by semi-massive to massive sphalerite and galena mineralization in quartzites. Four (4) samples taken 1979 returned 19.2 % Zn, 1.20 % Zn, 0.10 % Zn, 1.95 % Pb, and four (4) previous grab samples taken in 1978 returned 11.4 % Zn, 0.38 % Zn, 0.24 % Zn, 0.10 Zn (Source: Sigeom MERN GM) 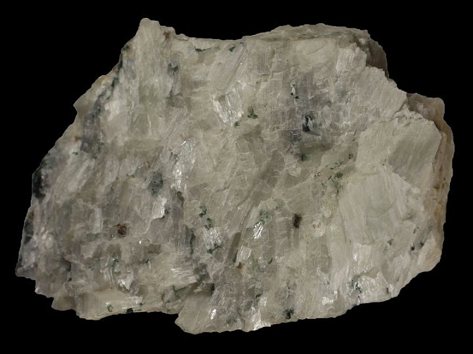 An industrial mineral comprised chemically of calcium, silicon and oxygen. Its molecular formula is CaSiO3 and its theoretical composition consists of 48.28% CaO and 51.72% SiO2.